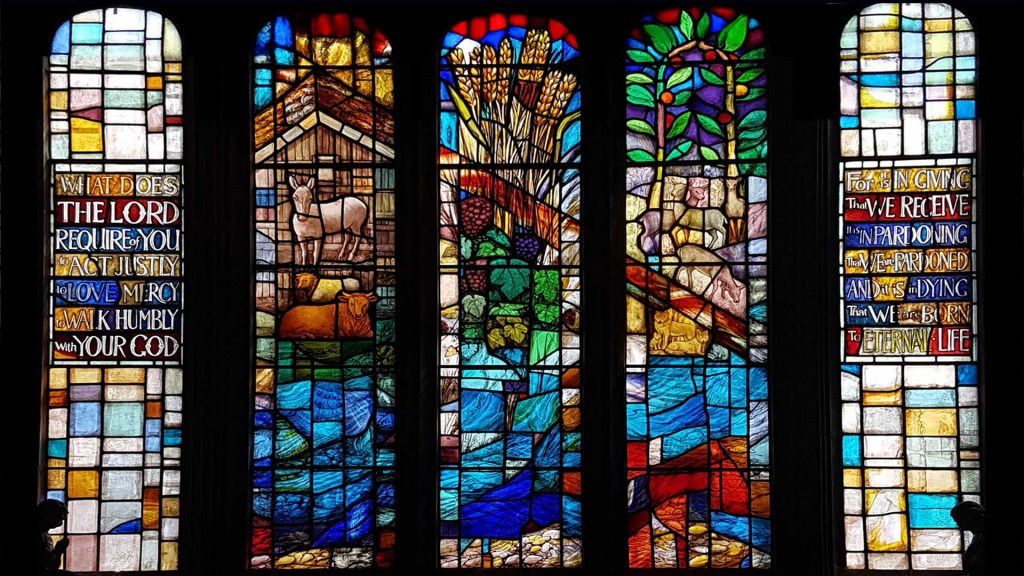 This window holds a most prominent in the building,  behind the altar – the central focus of worship.

Below are my Thoughts written at the design stage and …..

The brief for the window – “The design to be based around a  central Cross and to speak about the life of St Francis. The desire for a plain  Cross symbolizes Christ who died but was then raised to glorious new  life. The window should make a strong visual impact and to speak of God’s  redeeming, transforming love.”

Starting the design, I initially worked right across the seven  lights of the window with coloured imagery but, to keep to a budget, I contained most of the ideas in the three central  lights. Looking at notable events in St Francis’ life, mainly described by Thomas  of Celano and St Bonaventura and depicted so well in Giotto’s frescoes. ideas grew for translating some of these events into glass images for the East  window.
The Dove of the Holy Spirit depicted in upper  traceries The Cross. St Francis’ initial overpowering experience of  God communicating with him was in St Damian’s Church where he heard the figure  of Christ on the Cross speak to him. An image of a modern Cross is shown  centrally in the upper traceries. The vision of Christ conveyed a message that  St Francis should restore the church then in a ruinous stage. The experience  also changed his whole life.
Restoration   To symbolise a sense of this  restoration of St Damian a scattering of Victorian fragments  of old glass is added around the top of the traceries. This creates a visual  richness and focus in an upward heavenly direction and links the refurbishment of this window and church to the time of great transformation in St  Francis’ life.

Fire  the upper tier of lancets are in red/golds to represent  fire. At the outset ‘Fire’ came to my attention – someone described it  as a fitting symbol of St Francis’ religious fervor. Fire is also recognized as  a symbol of spiritual Transformation. It links to Pentecost and Dove of the the Holy Spirit.
A Communal vision of a Chariot of Fire    One night St Francis was  praying with some of the Brothers while others slept. Suddenly, a magnificent  Chariot of Fire swept through the house in a blaze of glory. The Brothers  who saw it were amazed. The sleepers woke up, terrified, but all knew that the Spirit of God had descended from heaven and was present among them.
“And behold, about midnight when some of the brethren were sleeping and  others were praying devoutly in silence, a fiery chariot entered through the  door of the house. It wheeled around inside, here and there, two or three times.  A big globe of bright light rode above it like the sun and lit up the  night. Those who had been asleep were startled into waking and all of the  watchers were amazed.  They gathered together in wonder, trying to say what  it was. Then, by the grace of the light, each one’s mind was opened to the  others and they understood that it was the soul of their holy father that shone  with such brilliance in tenderness for his sons”.

On another occasion St Francis also challenged a Sultan to a trial of  religions by fire. There are stories in “Little Flowers of St Francis”  that mention fire, particularly when he prayed. The surrounding area would  become so bright that people thought the fields were on fire.

Moving through these 2nd tier lancets there are some lines and  painting to hint at the wheels and movement of a fiery  chariot.

The Dream of a Palace  As St Francis slept, God  showed him in a dream a magnificent palace with thrones and full of Armour  bearing the sign of Christ’s Cross. Depiction of palace buildings,  towers (Giotto style) are shown in the left hand outer light, 2nd  tier.

Water    The Miracle of the Spring. One day St Francis was  unwell. He rode up to his mountain retreat of La Verna on a donkey lent him by a  peasant who followed on foot. Distressed and exhausted by the heat the  peasant pleaded for a drink. St Francis dismounted and knelt to pray,  whereupon he found water spring from a bare rock. The spring was never found  again. Water – a powerful symbol – is one of the four elements and sustains all  natural life. Water flows across the base of the three  central lower lancets. Some swimming fish may be depicted.

Animals  Representing St Francis’ love  of nature – a wolf family, several deer, animal shapes and birds. These are  shown in the RH lower ‘Nature’  tier (no.5)

Nativity   the Crib at Greccio.  Three years before  his death, in order to encourage a spirit of worship in ordinary people, St  Francis set up a crib in a cave near Greccio, complete with a manger  and a real ox and donkey. He thus started the tradition, which continues to this  day, of preparing a crib at Christmas time. The ox and donkey are shown with a thatched stable  structure and integrated in the LH lower tier  (no.3)                                         Andrew Taylor   November 2008

In the previous situation, the stone tracery supported a very dilapidated  experiment of a window installed in 1980.

It comprised double glazed panels, shaped to fit the tracery, with the image of St Francis and some animals painted onto the glass in transparent colour. The ‘lead-lines’ painted on, some possibly stuck on. Some of the painting was unfinished and, in other areas, paint was crazed or peeling away from the glass. All create a very unaesthetic situation. 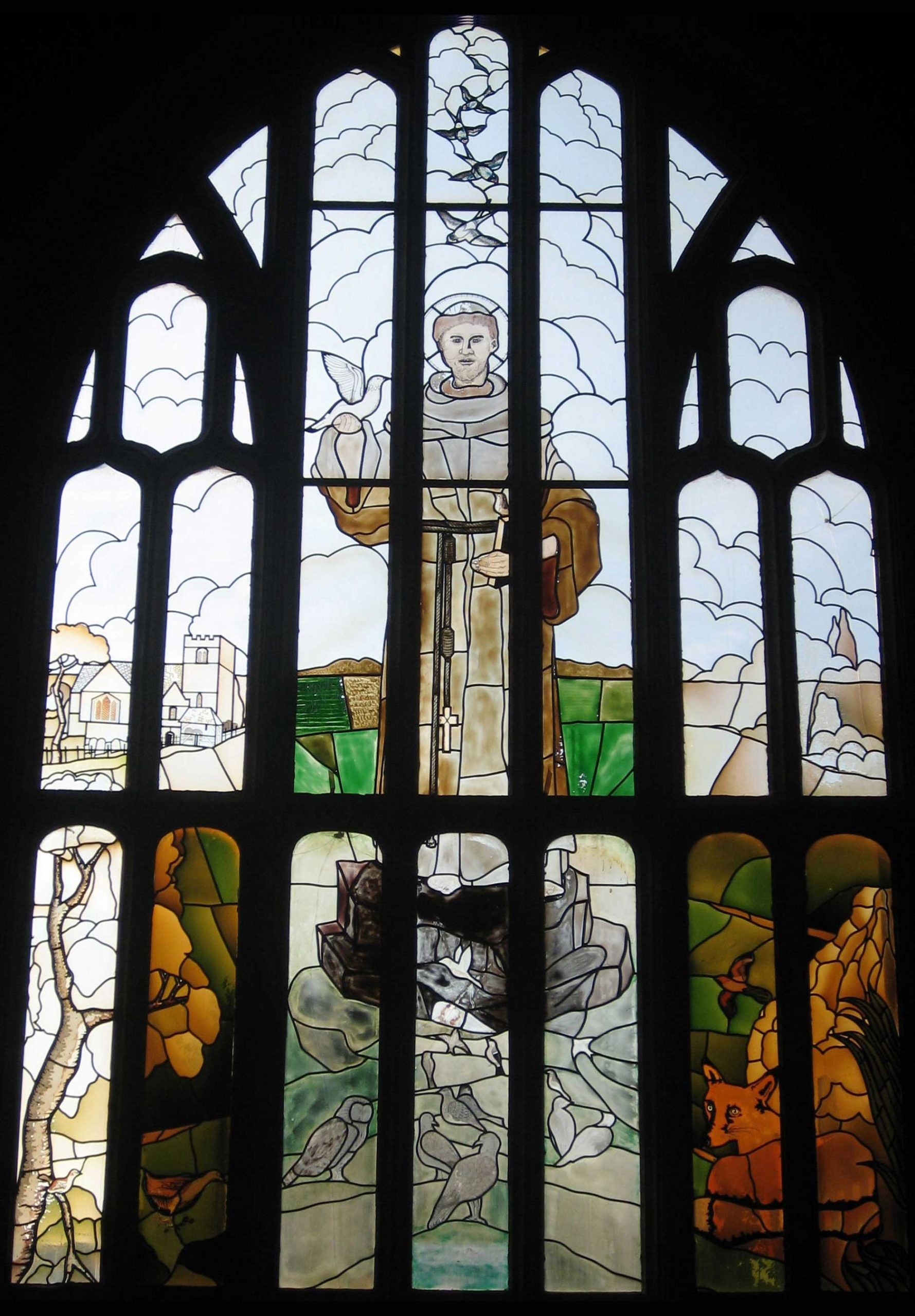 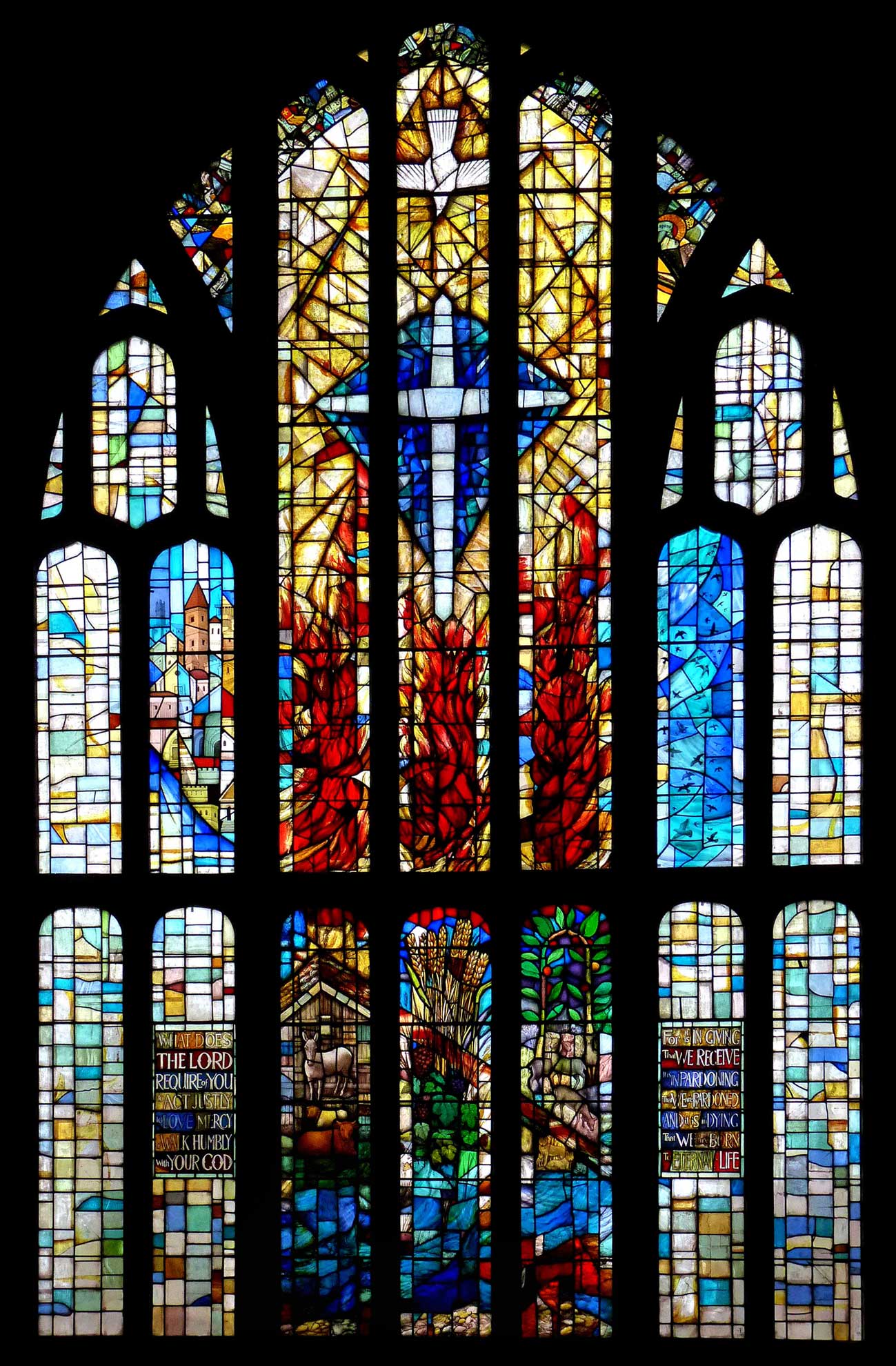