The brief was to depict something of the history and life at Seend, in terms of Its past and present, including the importance of its agricultural setting and way of life.
The right hand light shows the woolen and weaving industry which played a part in the early growth and development of the village. Many of the big houses were built on the wealth of the weaving trade. The lancet shows the weavers cottages, with images of working at burling (cloth shearing) and weaving shown below.
The left hand light shows the other industrial side of Seend.   Iron ore mining and the blast furnaces for the smelting process which took place adjacent the village for a period. Remarkably the three fifty foot towers of the blast furnaces and other industrial type buildings are now completely gone, leaving hardly any trace of their existance. The canal was built primarily to transport raw materials too and from the area. Now it exists mainly as a leisure facility and yet is a reminder of these former times of which perhaps few people are aware.
The central lancet celebrates the rural and agricultural way of life. Corn grows at the waters edge and above the corn, sheep are resting and cattle graze higher up. Behind them the farm environment can be seen. A cross is placed in the sky and above are the words “In the Cross of Christ I Glory”. Finally ‘A.D. 2000’ is placed at the base, blending into the blue colours of the water. Water flows through the base of the window, linking the three lights. This could suggest the idea of the ‘River of Life’ and the continuity of God’s gifts through the passage of time. 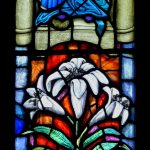 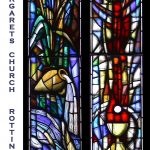 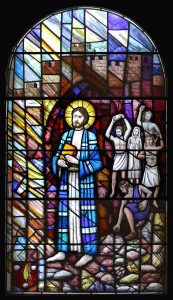 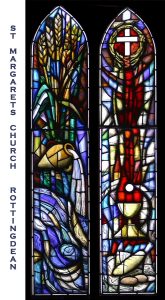