Some influences as an artist

Being born in South Africa of English parents, who were professional musicians, I had no formal art lessons until I came to the UK aged 16. However, from an early age I loved to draw. Additionally, in hindsight I realize the ancient African landscape had formed a deep impression on me me and a Jesuit education which must have helped instilled some intuitive and intrinsic appreciation of religious iconography and language of symbolism.

Finishing my school education in the UK, learning about art became a path of self-discovery. I discovered the city library and would spend hours there, I was in my element. Eventually I applied to study at Cardiff Art College and after gaining a degree in Fine Art painting , I then spent some years at scenery/set painting, initially for the Welsh National Opera, then in London’s West end, for a wide variety of opera and theatre etc., often working on a huge scale to ever tight deadlines. It was a great training ground and during this period several things happened that caused the seed to be sown for a subsequent new career in site-specific stained glass.

After taking some courses at The London City Lit., I was hugely fortunate to have the opportunity to draw cartoons for Alf Fisher at Chapel Studio for a time, where I gained much valuable studio experience and it served as a sort of mini apprenticeship and helped make my change of career possible.  And I think my early education had instilled some intuitive, intrinsic appreciation of the language of religious iconography and symbolism.

It is what occurs when one paints onto glass in architecture, combined with the varying effects of light which intrigues me. The vitreous paint fired onto the glass modifies the light and transforms the material in a way, so a new energy, a dimension of expressive feeling and ideas can be created”.

Aside from painting glass, whenever possible between commissioned projects, I love to get out to paint landscapes ‘en plein air’, escaping the confines of the studio.   This need to express what I feel about landscape is an important aspect of my personal work as an artist, and it feeds back into my stained glass work in some mysterious way. 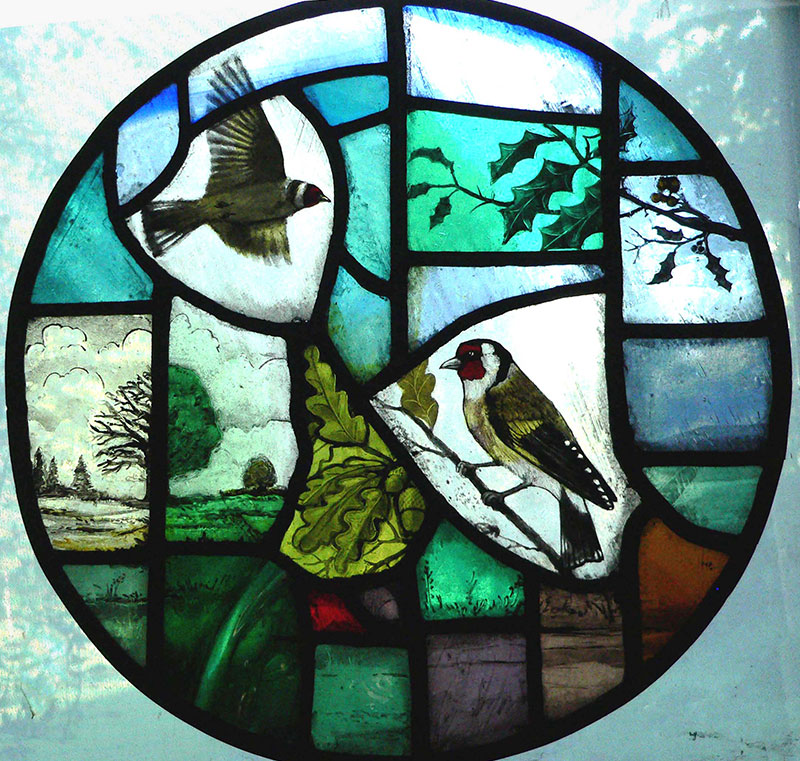